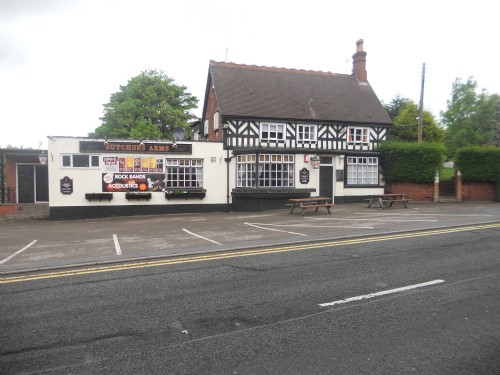 Team Spiritz were invited to this location to investigate past paranormal experiences due to the age and history of the building, concerns were raised by the new owners of the building, so we attended to see what we could experience.

9:30pm:- Team Spiritz arrived at the location and let themselves in. They had a look around the place, set up a hub for the evening in the main bar area. They set up all the equipment, cameras and trigger objects.

10:15pm:- Andy did a circle of protection in the main bar area. Investigation began. Andy was picking up on an angry male spirit, saying "Why are you here?" His name was Jack or Jake. Andy felt he had either owned the building, or was a landlord. He was not a nice spirit, he was making andy have a horrible feeling. He was repeating questions, kept asking "What are you doing here?" over and over again. Andy then had a feeling in his left eye, he felt he would have been blind in his left eye. He felt the year 1804 was connected to him. Andy felt calmer, and he felt the spirit respected them being there. Andy asked him to make a sound, Andy started laughing, the answer he got was "make a sound? what do you think I am?!" He told Andy that he liked Jo, so Jo called out to him. Charlie's k2 metre began to flash. Andy felt a breeze across his face. Two k2 metres were on the floor, Jo asked him to come close to them to make them flash, but Andy could see him tip-toeing around the lights, so he didn't touch them! Charlie had pins and needles down the back of both her legs. Andy had the image of him in a bloodstained shirt. Jo felt he had had a head injury. As Jo said head injury, Andy had a very negative feeling. Andy moved behind Sam, and Sam felt a cold blast down her back. John was on the other side of the room, and could also feel a cold blast. Everyone then introduced themselves to the spirit, and Dave asked - "Are you willing to talk to us?" He told Andy "More than willing". Dave asked him if they startled him when they entered the building, and asked him "Should we have knocked the door?". His reply through Andy was "knock the door?! you set the bloody alarm off!".

They then decided to try doing a séance, with two k2 metres on the floor in the middle of them. Andy was drawn to Charlie, he felt someone was behind her, he asked him to push her. Charlie's legs were tingling. Jo could still sense the head injury, and Andy felt that someone had threw something on him, causing the injury. Jack told Andy - "I'm still here but I just want to observe for a while".

They all then moved upstairs, into what looked like an old kitchen. Andy could sense a female spirit in the distance. The k2 metre began to flash. Jo had a sudden headache/pressure in her head. Andy could feel his throat tightening. Jack was then making Andy laugh, he was comical. Jack was saying to the female spirit - "oi you lady, someone wants to talk to you over here!". Charlie was picking up on the name Laura Jane. Dave saw something move through the hatch in the wall, in the next room, but there was no-one in there. Charlie had a very overwhelming feeling. Jo felt like her head was being squashed. Dave was standing at the top of the stairs, he saw something move across the light at the bottom of the stairs. Andy felt the female spirit died of strangulation (hence Andy choking). She had an abusive past. He felt there was not a strong connection to the building, more to the morgue. Andy was then picking up on a little girl, her name was Ella, she even spelt her name out to Andy. She liked John, Andy told her to hold John's hand. Andy felt she was holding onto John's legs. Charlie felt the year 1786 was connected to her. The k2 metres were going crazy.

They then entered the room next to the toilet. Calling out was done. Andy threw a marble and asked spirit to return it. The k2 metres were both flashing to red. Andy was picking up on the year 1804, he felt it was a good year for the building, but didn't know why. Charlie felt more connected to Laura Jane, she had shoulder length hair, with hair pins at the side. She could not get a full vision of her. Andy had the image of a dog, a brown/black mongrel.

11:30pm:- Tea Break. The k2 metre on the table began to flash every time John spoke.

11:45pm:- They all walked into the toilets. Charlie's k2 was flashing none stop, but Andy's was not affected. Andy began to call out. Both k2 metres started going crazy again, and suddenly stopped at the same time. As there was no electricity at all in the building, this could not be affecting them. Andy felt blocked. John felt someone pull his hair. Andy felt it was Ella, and that John reminds her of someone. Jo felt she was 7 years old and had mousy brown hair. Andy had the image of Ella standing over John, watching him, intrigued. Sam and Charlie pointed both k2's at him, they were going crazy. Andy felt it was early 1900's, and the dog was Ella's.

They then decided to try doing glass divination in the main bar area. Both k2's were going crazy before they even started. John could smell burning. The glass would not move at first, but k2's were flashing in response to questions. After a while, with more people on the glass, it began to move, and confirmed the answers for yes and no. They connected with a female spirit, she confirmed she was Ella. They asked her to point the glass to where she was standing, the glass pointed to John. She confirmed she liked John a lot, but when they asked her if he reminded her of someone, she said no. She just liked him. She said she liked talking to the team. Andy tried asking her what year she was in, but the team felt she was too young to understand. Ella's dog was present with her, and had died at the same time as her. Some of the team felt she had died in a fire, she confirmed this was right, and John could still smell burning. Her parents were not present with her. It used to be a farm before it was a pub. A loud tap was heard in the corner while everyone was still on the glass. Then the glass began to make tapping noises. There was a different spirit present on the glass. Confirmed it was a male spirit, Andy had a bad feeling about him, and confirmed he meant the team harm. He was not able to write. Andy felt his name was Tom, he confirmed this was right. He wanted the team to leave! Andy had images of him cutting bodies up, and he wanted to cut the team's bodies up, he got pleasure out of it! He worked in the morgue, but Andy felt he cut the bodies up illegally, more than he should. Andy asked if he ever got caught for his crimes, but as that was his job, he got away with it and lived his life as normal. The team were then discussing between themselves why it was called The Butcher's Arms, John explained that butchers would mainly have used it. As they were talking, Sam saw something move underneath Louise's chair, right to left, then straight away, a black shadow moved between Louise and Dave's shoulder. Tom confirmed this was him.

They then decided to try splitting up for a while.

Jo and John went into the cellar, did some calling out and took some photos, but got no response, it felt very flat.

Louise and Dave went upstairs, they did some calling out but got no response.

Sam, Andy and Charlie went into the toilets. Andy called out for Tom, and the k2 metre began to flash. Andy felt he was around, but he felt Tom had blocked him because they had got too much information out of him on the glass and he didn't like it. So they decided to call it a night.

2:15am:- They began to collect up all of the equipment and trigger objects, none had moved. Andy did a closing prayer of protection in the main bar area. Investigation ended.