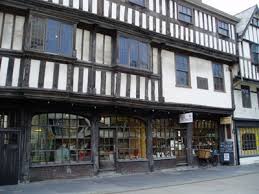 Team Spiritz were kindley invited to this location by the volenteers who work at this amazing building, it has reported to have 13 ghosts associated with this museum, so Team Spiritz took this opportunity see what we can find

This was also our New Team Members First investigation

8:30pm :- Team Spiritz arrived at the location and began looking around, and setting up equipment and trigger objects. They used a downstairs room as a hub for the evening, where they did a circle of protection and the investigation began.

9:20pm:- They all went into The Thomas Collins Room. Andy began to call out. Andy then picked up on the name John, he was linked to the military. Andy then had the image of an office area in ww1, he felt John was from that era. More calling out was done. The lights on the k2 metre began flashing. Andy felt John was not stroppy, but he had a high and mighty personality, he was authorative. Andy was getting the year 1942 - but this was nothing to do with John. John was in his 40's, and a colonel. 1942 was coming from a different spirit, a male, in his 20's, no older than 25. He was injured in a bomb blast. Louise did not feel like herself, she felt very calm, too calm! She felt like she was on drugs! The male spirit was not linked to the building, he was local. The k2 metre was flashing to red (max).

They then moved into the room opposite, the school room. Dave's camera switched off on its own. Team member John was standing in the doorway, when he saw a flash of light in the other room and everyone heard a click, like something electrical. Dave was picking up on a female spirit, Elizabeth. Andy tried linking into her aswell, he could see a frilly bonnet. Dave could see her as a scullery maid, dressed in plain brown, but just a split second vision. They felt she was from the early 18th century. She was between 20 and 30 years old. Andy had a flash image of her in a field, with children running around her. Louise was still feeling very strange, she said " It's such a relaxing place!". Andy heard the word "medical". The building was something to do with medical. He felt it would have been a medical unit, and the spirit from the bomb blast was connected to it. Again, John was standing in the doorway and saw and heard a flash and click in the other room again, so the whole team went to investigate. When John walked in, a fan had switched on and off on its own. The team worked out that the flashes of lights and clicks were in fact coming from the electrical heaters, so was not actually paranormal. John went downstairs to ask the staff about the fan, but they said the fan was on a sensor, so this was not paranormal either, but had scared john to death! But as paranormal investigators, Team Spiritz always look for rational explanations before saying it is paranormal.

They could all smell a musty smell, like old wood, smoky. Footsteps were heard across the room. Andy was then picking up on a little boy, he was wearing a cloth cap, shorts, a jumper with no sleeves, scruffy looking. He was age 8 or 9, but looked younger, about 6. John said his look would have been 17th - 18th century - the industrial revolution maybe. John then went around the corner alone, and heard 3 taps. Sam then stood in there alone and heard more taps. Andy felt his name began with an M, but could not get any more from him as he felt he was not very literate.

They then entered The Percy Baker Room. As they walked in, Andy suddenly felt very sick. Calling out was done. Cold icy blasts were felt by everyone.

10:40pm:- Tea Break in the hub. As they were having a break, Andy felt drawn under the building, like he wanted to go down a cellar/basement. John went to ask the staff if there was one, and there was! They opened it up for the team.

They all entered the basement, and stood around in a circle doing a séance, with the k2 metre in the middle on the floor. Andy heard "What you doing here?!", someone was shouting at him. He heard the name Arthur. There were 2 spirits, one was shouting "Arthur!". the cellar went very cold. Andy heard the name Alice. The k2 metre was flashing to red. Andy felt that Arthur was calling Alice down to the cellar. Charlie was picking up on a spirit called Clive, she then had a blowing in her ear. Sam felt a poke in her back. Andy could see Arthur in a dirty striped shirt. He had a gruff voice. He had long dark hair, and a country accent, like a farmer. Sam had a cold blast on her face, while Louise felt it on her legs. Andy then heard 2 different voices, one said "Arthur come down here!". The 2nd voice - "My name is Arthur, what you doing down here?". He then heard - "Get out, Get out!!" "Get out of my room!". The basement should have been bigger, it was just a small section. He was shouting Alice to come down. Andy felt he was stood on the stairs of the basement saying "look at these lot down here!". John felt someone was watching him from the staircase. As Charlie could feel more blowing in her ear, the k2 metre was increasing.

They decided to close down the séance, and headed back upstairs into the hub. Dave had recorded the séance on his voice recorder, and began to listen to some of it. As they were listening, the k2 metre nearby began to flash to red. Andy asked to make it stronger, keep the red light on, it did for a few seconds then stopped. Andy felt spirits were popping in and out.

They then decided to go back upstairs into The Thomas Collins Room, and began glass divination. The glass began moving and confirmed the answers for yes and no. They connected with a female spirit, a little girl. The glass pointed to everyone around the table to say hello. After counting, she confirmed she was 10 years old. She said she could spell, so they asked her to write her name with the glass, she wrote - diane. She confirmed she knew the year she died, and could write numbers, so she wrote - 1910. Both k2 metres began to flash. She was not grounded, and confirmed she trusted the team. She didn't live there, or work there. She knew one of the team. They asked her to point the glass to who she was connected to, and she pointed to Dave. She was a distant relative. She spelt out her surname - shaw. Andy asked her if Dave looked into his family tree, if he would find her, she said yes. She had lived in Tewkesbury. Dave asked her if she knew Mary and Hectar, and the glass went wild! Both k2 metres were flashing to red. She confirmed she died aged 10, not from an illness, it was accidental.

They then connected with a male spirit, an adult. He used to live there. He knew the year he had passed, and wrote 1800 with the glass. He died aged 80 from natural causes. Charlie was picking up on the name William, he confirmed this was his name. When he lived there, it was also a place of work. He was smartly dressed. He died in hospital, and was ill for a long time, from a disease. They could not get any more answers from him, so they decided to call it a night.

2:00am:- They began to collect up all the equipment and trigger objects. Andy did a closing prayer of protection in the hub. Investigation ended.