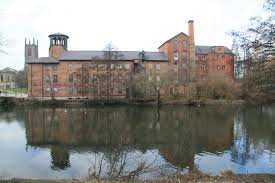 Team Spiritz were again invited to Derby Silk Mill and Industral Museum by S-P-I-T to assisit them within their paranormal event, as this was a location originally sourced by Team Spiritz, we took the opportunity to assist some great paranormal friends

9:15pm :- Team Spiritz arrived at the location and met up with S.P.I.T. In the main entrance room Andy was picking up on children walking through, as if they were going to work.

10:00pm:- They then entered The Train Room on the first floor (previously the original loom room). As they walked through, one half felt fine but the other was very oppressive. Andy began to pick up on a male spirit. He was a boss, who used to work at the factory. He looked after children. He was very very strict and didn't like the team being there. Andy felt he was a very bad energy. He felt his name was Jeffrey or surname Jeffries. Andy then asked for a temperature drop on the laser thermometre, and it dropped from 13 to 11 degrees. Andy then saw the man stand up and charge down the middle of the room, telling someone off.

They then started glass divination, Andy joined in but nothing happened, so all the men left the glass, leaving just the women on. The glass moved across the table, and confirmed it was the boss man. He would not let the children come onto the glass. He was not actually a boss but he thought he was. He used to beat up women and children, and enjoyed it. He went to school but wasn't very good. They then asked how many spirits were present, he answered 25. He liked men, but not women. He was married and beat up his wife. he also had children. He passed in the 1700's. 1789. He started working there in the 1740's. Someone else then came onto the glass.

A male spirit then came onto the glass. He was a child. He used to work in the factory, but didn't like it. He was 13 years old. Confirmed his name was Joshua. He was beaten often. There were younger spirits present with him, one of them was Jake. They look after each other and used to work together in the factory. He is not grounded but he comes in visitation. He was happy to talk to the team. When he was alive he was man of the house.

1:00am:- The whole group then went up into the attic, but it was absolutely freezing, so Andy and Louise went into a smaller room on their own and did some calling out. They were still getting no response, everything had gone very quiet.

1:30am:- Team Spiritz decided to call it a night and started packing up. Closing prayer of protection was done by Andy. Investigation ended.