Team Spiritz were invited to do the very 1st paranormal investigation of this old park keepers house (now community centre), our concerns were that it wasn't a big location, but due to the age of this building we were intrigued to find out what history lies within this location 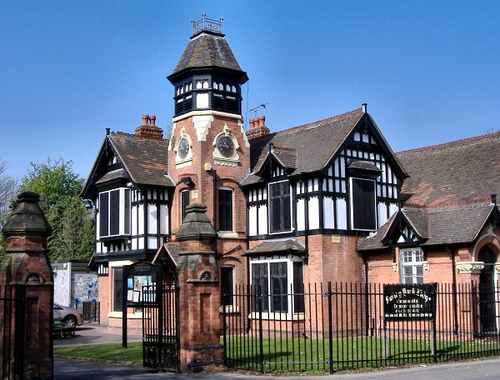 8:30pm :- Team Spiritz arrived at the location and were shown into the building. They used the reception area as a hub for the evening. They began to set up cameras and trigger objects. Andy did a circle of protection in the hub. Investigation began. Andy was picking up on a large man. Andy and Simon both felt an oppressive atmosphere. Andy felt that the male spirit was staying distant. Everyone felt cold around the bottom of their legs. Andy did some calling out.  Simon put his spirit box on the floor in the middle of the room, and it started beeping straight away, there was a change in temperature. Andy felt the male spirit was angry, and when he mentioned it, the spirit box beeped again. There was then a tap heard on the door  in the corner. Simon then heard a breath right next to him, and as he said it, the spirit box beeped again. Andy could feel the energy getting heavier, he felt like he had a weight on his head, there was alot of pressure. There was a click on the ceiling. Andy heard "You're in my home!" You're not welcome in my home!". The woman from the location told Andy that it made sense to her .Andy could see him with a beard, it was bushy, but not huge, and quite tidy. He was very broad, quite muscular. His beard was brown. Andy had a calmer feeling, he felt that there was maybe another spirit present. He felt the name Arthur was connected. Charlie was picking up on the name Adrian. He was part visual, he wouldn't come forward enough for Charlie to see him properly. He was approx. 6ft 4in tall. What Charlie was describing sounded familiar to what had been seen a few weeks back. Andy felt the energies were switching. One was calm, one was angry. The spirit Charlie was picking up on was a family man, protective of his home. Andy felt he would have lost his home and it made him angry. Charlie could hear him shouting "Get out of my home!". Simon felt there was an Irish connection. The k2 metres flashed to confirm what Charlie was hearing. Charlie could see him with a buttoned white shirt. Andy could see a waistcoat. Andy felt he would have had a blockage - a heart problem or blood clot. The k2 metres went off.  He was alone when he passed, the k2 metres confirmed this. The woman from the location felt the 1940's were connected, and a strong back problem due to his size. Andy felt there would be children outside, and the large angry man would go to the door shouting, and they would run off. The woman from the location confirmed it was very relevant. Andy was shaking at his scary presence. He would have had terrible blood pressure, Andy's face went very red and warm.

They all then moved into the main hall and decided to try glass divination. They connected with a male spirit, he said his name was not Arthur and when they asked if his name was Adrian,  he didn't answer. Dave asked if his name was Tom, he didn't answer again. The glass pointed to all the females, he wanted all the men to leave so they all went upstairs. The girls stayed on the glass, but it would not move, they all felt that he had followed them upstairs, so they asked for specific things to happen to them upstairs. They then reset the glass and tried again. The glass started moving and the spirit was connected to someone in the team, some personal information came through that cannot be published.

They reset the glass, and straight away everyone had cold hands. Charlie was picking up on a male spirit observing. He was quite slim, young, in his late teens? Karen felt he had had an accident. A motorbike accident. Everyone was freezing cold. Charlie had pins and needles down her back.

The boys came back downstairs, while they were up there, Andy had his ear pulled, and had his left hand touched. His eye was also affected. The k2 metre went off as they went to leave. Simon saw the room get darker and also went colder.

Andy joined in with the glass. Someone / something touched Louise's leg. They were connecting with a female spirit. Everyone went freezing cold. Andy started to get emotional. Charlie felt a poke on her hip. The female spirit confirmed she was affecting Andy. Everyone agreed the room felt different, there was a heavy pressure. Cold air was blowing around the glass. Louise could smell cigarette smoke, then it blew over to Sam. they were getting nothing else from the female so decided to end the session.

Dave had been sitting alone in the reception area. He had been picking up on a young boy. They decided to have a break,but just before the lights were switched on, the woman from the location saw something move across the reception area on the cctv cameras. Louise had a sharp pain above her eye.

Break - everyone was listening to Dave's voice recorder. voices were heard.

They decided to try glass divination again in the reception area. Andy and Louise stood in the office watching the cctv cameras. Andy wanted to stand in front of the window, as he turned back around, Louise saw his face change, he was someone else. The glass began moving in big circles, very strong. karen heard a tap behind her. Charlie had a sudden massive headache at the back of her head, Louise also had a headache. The glass pointed to Dave so he came off the glass. Dave and Louise went upstairs. They asked spirit to affect them. Andy felt there was a child around that was too weak to communicate through the glass. Andy was picking up on the name Angie / Angela. karen had the image of a ship.

Dave and Louise upstairs - they asked if it had always been a library, and the k2 metre went to red. Louise's head felt fine upstairs. Charlie was picking up on a female. Dave felt like someone was following him. Louise then felt like her head was being squeezed and had a taste of blood in her mouth. Andy wanted to look over the balcony, and as he did, his k2 metre went off. He felt someone had an accident on the stairs, someone fell. It was not a nice feeling.

They then tried a seance in the reception area. Charlie was picking up on a male spirit, Harold. She felt he had a glass eye. Louise felt it was his left eye as she had a sharp pain in her left eye from the back of her head, it felt like someone was poking her eye. Charlie felt he was not grounded, was just there in visitation. The k2 metre went to red and stayed there. Charlie felt the year 1968 was connected. Andy was picking up on the surname Jackson. Harold Jackson. Charlie felt his glass eye was due to a work accident, with metal. He made pointy metal fences. Louise was till feeling pain in her eye. He had lived fairly local. He was a friend of the park keeper.

They began to collect up all of the equipment and trigger objects. investigation ended.