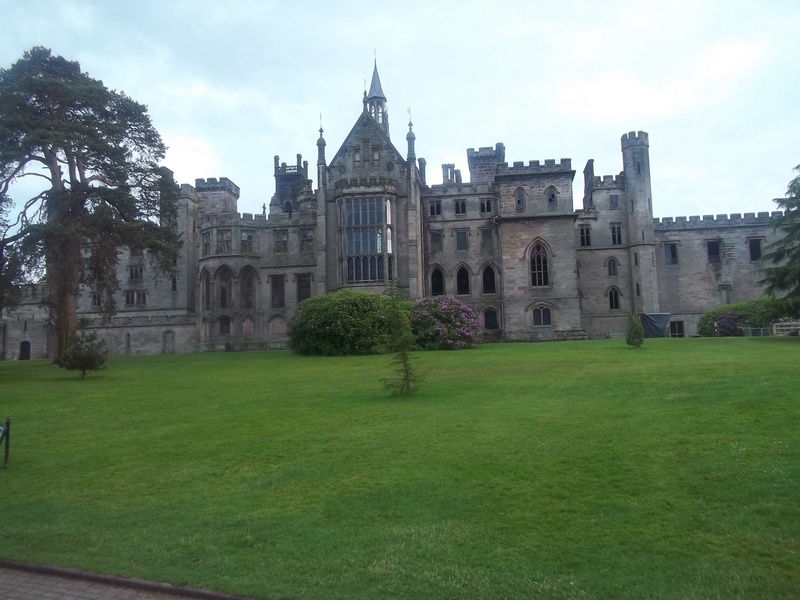 Team Spiritz were kindly invited to this location by our good friends from S-P-I-T  we have always wanted to investigate this location as its so steeped in history and we have visited many time, so we didn't refuse this great opportunity to look into this great mansions paranormal activity

7:30pm:- Team Spiritz arrived at the location and checked in. They joined S.P.I.T and other teams in the mansion and had a safety talk.

9:00pm:- Team Spiritz first area to investigate was Hex the ride. They began setting up cameras and equipment. Investigation began by Andy doing a prayer of protection. Some of the team began to walk up towards the ride, and as they walked up the steps, they noticed some large curtains (that riders have to walk through) were moving in and out. They looked around for breezes etc. to find an explanation but could not find one. Fred, a guest from S.P.I.T began to call out, and the curtain moving seemed to respond to his questions. Noises were coming from behind the curtain, tapping noises, like pebbles being thrown, coming from the ride, and the curtain was moving at the same time. Andy was picking up on 2 spirits, a male and a female, they used to work together. He felt the male was named Micheal. Andy asked him to blow the curtain out for 10 seconds, and it did. Louise had a sudden sharp pain in her back.

They all then moved down to the other end of the ride, by the entrance. Andy was picking up on the female spirit. She was a 'lady'. Very noble. Micheal looked after her, like a servant, but with a higher ranking. Fred was asking her questions, but Andy felt she was too posh to answer, she told Andy "I'm not doing what you say!". She was not nasty, she didn't know any different. Fred was then asking Micheal questions, but Andy felt he was waiting for a command off the lady before he could answer. Dave heard a scream coming from by the curtain. As they moved further down, back towards the ride, Andy felt energy was swirling in the middle section. The curtain had stood still for ages, so it could not be a draught causing it. Andy felt that Micheal was not allowed to come through the curtain, the area the team were standing in was not his area. Charlie had sudden back pain. Andy felt the year was the 1500's, and was trying to think what would be there at that time, so they called John down to ask him if he knew. As he walked down, Sam and Louise passed him, walking the other way. As they were walking through the middle section, they both stopped walking at the same time. On the floor, to the left of them, Louise saw a large orb move across the floor, but Sam saw it as a white bare foot! They called all of the team to join them. Andy felt this was the lady spirit they had both seen. Charlie felt that the back pain she was experiencing was to do with female labour pains. Andy felt that the lady was wearing a white dress. Movements were heard in the queue area.

They decided to try doing a séance in the middle section. John and Sam sat on the floor, and they could both smell men's toilets! Andy felt the lady was saying "You shouldn't be in my area!". There was a knock on the door from another team, indicating time for a break, and Charlie's k2 metre flashed to red, she felt the spirit didn't want the team to leave.

11:10pm:- All of the team then went down to the cellar, where Andy set up the laser wall. They began to call out. Andy felt it was very busy in there, with people going in and out. He felt the number 20 was relevant. There was a big feast, and maybe 20 staff?. Everyone saw a square of light in the laser all. Andy felt there would have been a big banquet, someone important was coming to visit, an Earl from another county. Andy felt it was 1600's. 1610 - 1680. Lots of people were rushing round, it was a very important time. Andy felt the Earl was from the South, maybe Cornwall?

They all moved into the kitchen and decided to try table tipping. The table began to move slowly. They asked the table to move if there was a female spirit present, but it moved when they said male. Charlie felt his name was John. He had worked there and was in charge. He confirmed he was the only spirit present.

They then decided to try glass divination. The k2 metres began to flash. Just outside the room, John saw a flash of bright light in the cellar, it had filled the room, and had moved towards the camera. They kept asking questions on the glass, but it would not move. Just men tried and got nothing. Just women tried, and the glass finally started to move. They connected with a male spirit, and the k2 metre flashed to red. They asked him to point the glass to who he wanted to talk to, it pointed to all the women. He wanted the men to leave, so they did. He confirmed to the girls he was grounded. They asked him to spell out his name with the glass, he spelt - Edmond. They asked him to write the year with the glass, he wrote 1610. He  confirmed he had worked there then. He seemed to do a lot of important jobs. They asked him to write how old he was when he passed, he very clearly wrote 37. He had died from the plague. The k2 metres began to flash again. He confirmed he liked the ladies. Charlie asked him to show himself to her. She could see him with blue eyes and dark hair. The contact with the glass was new to him and he found it very interesting. Charlie felt he had a younger sister, which was confirmed on the glass, she was with him, she had also died of the plague. Charlie could see her with freckles and ginger curly hair, a dark blue frilly dress and a ribbon in her hair. All was confirmed. Edmond had a side parting and was smiling at Charlie. He was quite tall, about 6"2'. The k2 flashed to red. He was showing Charlie the rat that brought the plague, so hates them. He was showing Charlie the bedroom where he had died. He told Charlie that his mom had killed herself. His sister had died before him. He confirmed he was not happy and wanted to move on. They called Andy back into the room, and he moved john and his sister into the light.

They then moved up onto the roof. Andy was picking up on a male spirit on the first level, he was very dominant. He was then picking up on another male. The 2 males were fighting, and one got pushed over the edge. One of them was very angry. The spirit that was pushed was grounded, and the other one was residual. There was a religious connection. Andy felt there was a lady involved, jealousy. He felt they were from the 1800's. There was also a gun involved, he was shot, then pushed over. As it had started to rain, they moved into one of the rooms off the roof, and all sat on benches. Andy began calling out. Dave was picking up on the name Florence. Andy could see lights up the wall. As nothing much was happening, they decided to head back to the hub and call it a night.

2:25am:- They began to pack up all the equipment. A closing prayer of protection was done by Andy. Investigation ended.